Crypto, PriFi, and the Fight Against Surveillance Capitalism 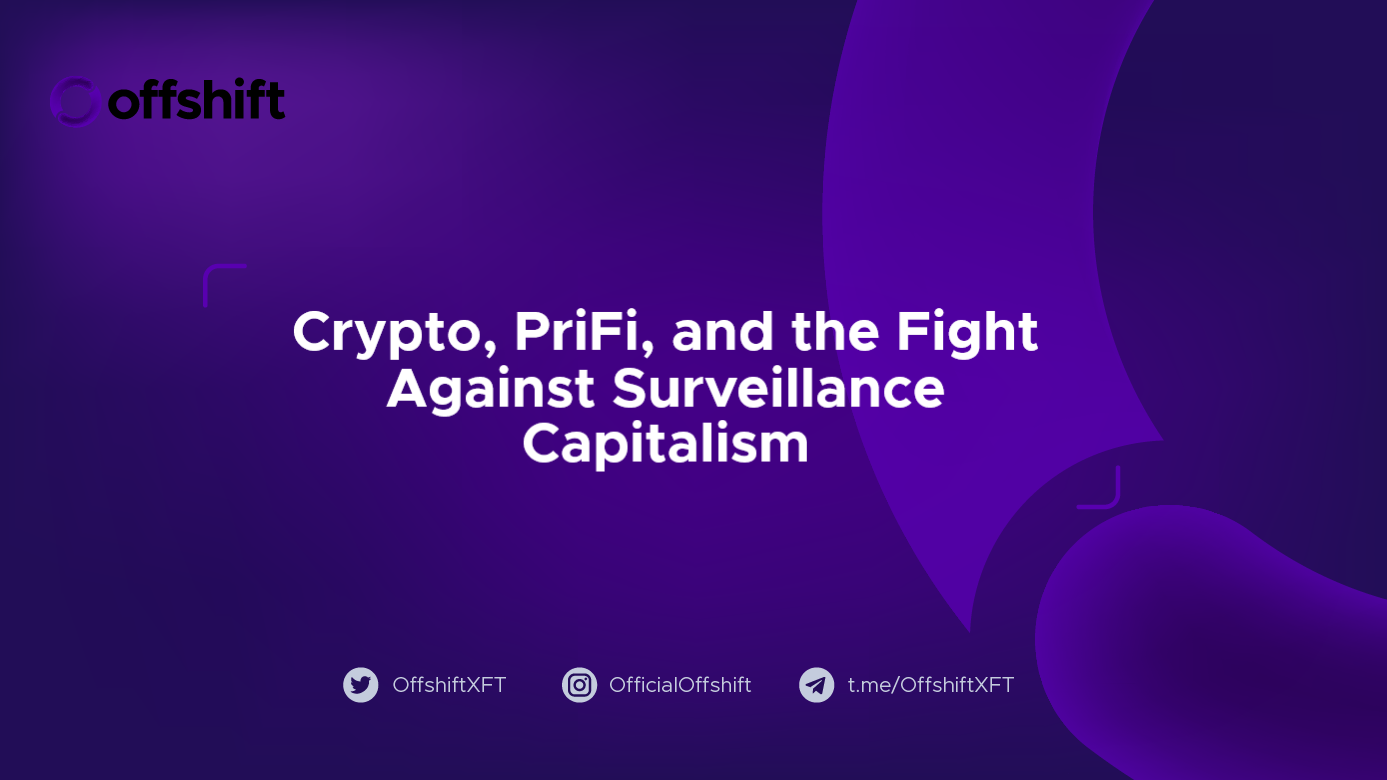 Privacy is a human right. That’s why accounts have passwords and rooms have doors. The maintenance of privacy rights is an essential aspect of the social contract that governs laws and human interaction. At least, it should be.

In the internet age, the element of privacy has been abstracted out of sight. In its place has been the rise of surveillance capitalism: the commodification of personal data for profit. Now, your identity, relationships, interests, finances, movement, facial expressions, and even your deepest secrets are fair game on the big data marketplace. Surveillance capitalism is one of the fastest growing economies in the world. While more and more people are now glaringly wary of its encroachment, most operate with a blissful unawareness of the wholesale profiteering taking place atop the exploitation of our privacy rights.

In the words of Shoshanna Zuboff, the author and Harvard professor who popularized the term, surveillance capitalism is a “new economic order” and “an expropriation of critical human rights that is best understood as a coup from above.” It is, she says,

a rogue mutation of capitalism marked by concentrations of wealth, knowledge and power unprecedented in human history.

It started with Google and Facebook. There’s a reason why a scrappy start-up that started out as one little search bar is now worth $1.5 trillion dollars. Google is now the world’s dominant portal to the internet — It has over four billion users. With the launch of AdWords twenty years ago, Google began scanning your browsing data and the contents of your email for keywords they could sell to advertisers on a pay-per-click model. Google Ads is now the company’s primary source of revenue.

Similarly, Facebook’s revenue model is predicated on selling user data to whoever may seek it. You share, you like; they collect, they monetize. Facebook lost the trust of the public when it was found to be selling user data to Cambridge Analytica, a nefarious data-driven propaganda service that flooded the platform with highly curated fake news that was so insidiously effective that it radicalized millions and influenced national elections. Unfortunately, Google and Facebook only opened the door to far more intrusive and omnipresent forms of surveillance capitalism.

We now take for granted that our phones are scanning our faces and photos, tracking our movements, feeding every website and thought into an algorithm. In a connected world, the panopticon is monetized and crowd-sourced.

There has been a pushback to the ever-extending arm of surveillance capitalism. In the United States, the very notion of privacy protection is written into the Constitution via the 4th Amendment. It protects people from searches of their selves and affects. While the 4th Amendment protects us from government violations of privacy, we willfully trade our privacy to corporations when we agree to the fine print hidden in the terms of service of apps and platforms.

It was the European Union that took the broadest action against this issue of consent with the introduction of GDPR regulations in 2016.

GDPR provides ‘a legal framework that sets guidelines for the collection and processing of personal information from individuals who live in the European Union (EU)’ in regards to data collection and consent. The purpose of these rules is to ensure that the individual understands what he or she is consenting to. This means that consent should be freely given, specific, informed and unambiguous by way of a request presented in clear and plain language.

While regulations are an essential front from a legislative perspective, they essentially provide roadblocks for big data corporations to work around — only slowing the inevitable rising tide. That’s why you’re inundated with information data-walling consent pop-ups at every juncture in your browsing experience nowadays.

The fight against surveillance capitalism is also taking place on the tech front. Cryptocurrency is often touted as a solution to the monopolies of big tech and finance alike, and has provided fertile grounds for development on disintermediated solutions.

But the blockchain ecosystem is only as private as the platforms that compose it — and that is a wide spectrum. Many centralized exchanges and retail crypto platforms eschew disintermediation entirely and simply mimic the big banking experience — surveillance and all — writ large on the digital asset space.

Even in the more sophisticated sector of DeFi, the degen mentality prioritizes speculation, liquidity, speed, then security, and finally privacy in the search of fast growth and quick gains. While phrases like ‘trustless’, ‘immutable’, and ‘transparent’ are heavily relied upon in the blockchain world, they are far less useful unless applied across the board in tandem with privacy.

So while the fight against surveillance capitalism is a worldwide movement in motion, it’s not enough to simply hold it off. We need to create business models that incentivize privacy and build in limitations on surveillance into the revenue model. While VPN networks, private web browsers (Tor, Brave), and privacy coins (ZCash, Monero) have realized the concept of a more private internet, it’s time to move that internet out of the shadows and into everyday life.

That’s what PriFi is all about — private, decentralized finance. A growing collection of blockchain-based platforms utilize tech like zero knowledge proofs to code privacy into the experience, signaling an advancement from simply fighting back against surveillance capitalism to creating a standard to replace it.

Offshift is a crypto trading platform with privacy coded into its very core. That means zero knowledge assets, zero knowledge trades, zero knowledge derivatives, and zero knowledge staking. If cryptocurrencies and blockchain platforms are going to come good on their promise as a force for decentralization, then a robust PriFi ecosystem is as important as a thriving DeFi market.

Along with decentralization and disintermediation, privacy needs to be elevated to primacy in the mission of crypto. Otherwise, the technology and the people who create it are falling short in the mission to create truly equitable economic structures and anti-surveillance economies. In that case, crypto will only be contributing to the dystopian encroachment of surveillance capitalism.